Posted on June 28, 2016 by midcenturymundane 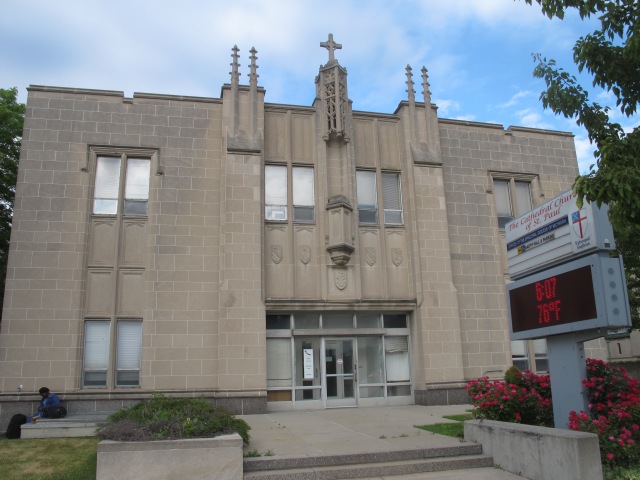 Detroit has a good number of turn of the century, high-style churches, close to a dozen lining Woodward Avenue at intervals leading out of downtown. St. Paul’s is one of several done in the Gothic Revival style, this one by prolific architect Ralph Adams Cram, a proponent of the Gothic Revival interpreted in a modern way. The church itself dates to 1907 and is associated with several famous Detroiters, including serving as the location of Henry Ford’s funeral.

The parish house next door dates from 1959 and is a surprisingly straightforward interpretation of Gothic Revival. Cram had been dead since 1942 so it was not designed by him although it could have been his successor firm, which still exists today. The quality materials including a granite base and limestone facade, keep the building firmly tied to its high-style neighbor, although here the Gothic details feel like more of an applique. Today the statue above the entrance is missing and it’s possible that the parish house is empty.

This entry was posted in Michigan. Bookmark the permalink.