Posted on March 17, 2015 by midcenturymundane

The main branch of the Worcester Public Library is a long formal building with an odd orientation and location. It is situated behind City Hall at the intersection of Library Lane and the one-block long Salem Street; the main entrance faces a large parking lot.

The style is reminiscent of Edward Durell Stone with regularly spaced thin columns and a flat classical roofline. The entrance pavilion has been altered over the years but on one side, the arcade running along the exterior and holding up the second floor can be seen.

The architects were actually the New York office of Curtis and Davis, the prominent New Orleans-based firm that existed from 1947-1978. The project was announced in 1959 and completed in 1964. The building was renovated in the 200os and the original rough finish on the exterior concrete was eliminated, heightening the formality of the design. 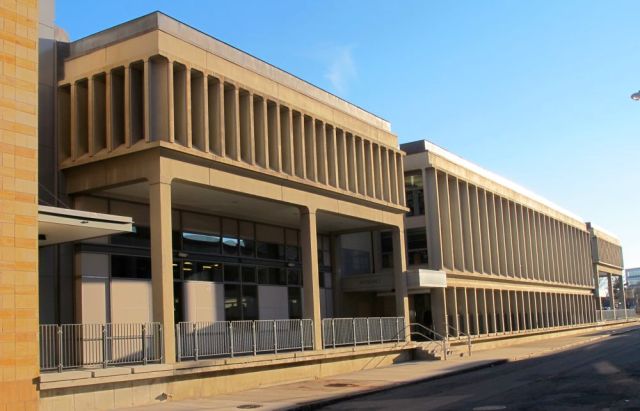 There is also a newer addition of orange and tan stone at one end of the library (the edge of which can be seen in the photo above).

This entry was posted in Massachusetts. Bookmark the permalink.