Posted on December 18, 2014 by midcenturymundane

Thanks for reading Mid-Century Mundane in 2014! This will be the last post for the year. There will be much more mid-century architecture to feature in 2015 including the launch of a new project, Queens Modern! So stay tuned for more exciting news and in the meantime happy holidays to all!

For this last post of 2014, we are featuring a historicist Roman Catholic church on lower Park Avenue. The Church of Our Saviour exemplifies the continued interest and use of historical design styles even during the mid-century. The building was built in 1955-57 and is designed in the French Romanesque style, using traditional materials and a wealth of traditional style carvings throughout the design. The facade is most likely limestone and the roof is red tile with a copper steeple. Unlike many churches of the era, there seems to be no attempt at modernizing of detailing or use of modern materials. The bell tower does hold air conditioning equipment, a nod to the era this was built. Even then air conditioning was not typical in all new churches.

Just a block away is the Community Church of New York, built almost ten years early but in a much more modern and simplified style. The comparison between the two is striking and only further highlights the traditional look of Our Saviour.

This church was designed by Paul C. Reilly, an architect perhaps known more for his theater design, having worked for the prolific designer Thomas Lamb. But Reilly did do several buildings for the New York Catholic Diocese, including the Church of the Good Shepherd in Inwood. The interior here is surprisingly ornate with a lovely coffered ceiling and richly colored artwork behind the altar. 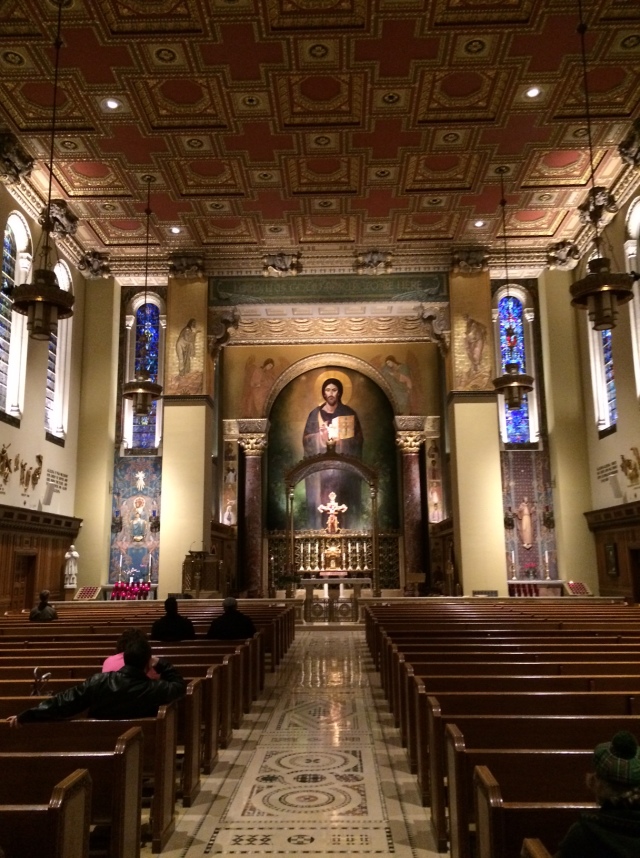 2 Responses to Church of Our Saviour, Murray Hill, NYC