Posted on July 24, 2013 by midcenturymundane 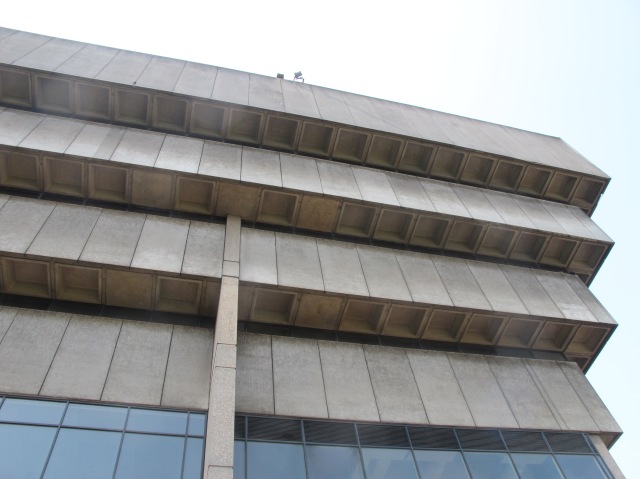 The Birmingham Central Library has been in the news quite a bit in the past few years as the city decided to close and demolish what they considered an outdated building. A new central library will be completed in fall 2013 nearby and this building is scheduled for demolition in 2014. The previous, Victorian-era library was demolished as part of a large-scale 1960s redevelopment and urban renewal of Birmingham, much of which is now being reversed or reconsidered.

The library towers over Chamberlain Square, the Victorian-era art gallery (not shown), and the Chamberlain Memorial, seen on the left side of the picture above. The entrance and lending library are in the curved, three-story section at right while the larger, inverted pyramid is the reference library. The library was designed by the well-known Birmingham-based architect John Madin and completed in 1974. Madin’s firm was the most prolific in the city working in the modernist and brutalist aesthetic, but several of its buildings around Birmingham have been demolished in recent years or are scheduled to be demolished like the library.

Many ideas and plans related to the library or the surrounding area have been changed or were never implemented. The reference library has a center atrium with glazed balconies and was planned to have pools, gardens and fountains. Most of this was never realized and the atrium was later glassed over. Planned as part of a larger complex were a school of music, drama centre and offices and other establishments, of which only the music school was completed. Today, while a  popular icon, the library looks to soon become a footnote in Birmingham’s architectural history, despite the efforts of organizations such as the 20th Century Society. This website (with wonderful vintage images) is another great archive of the past and future of the building. 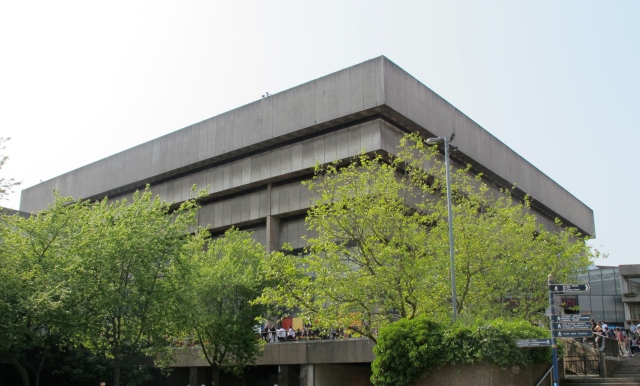 This entry was posted in England, Global. Bookmark the permalink.