Posted on March 27, 2013 by midcenturymundane 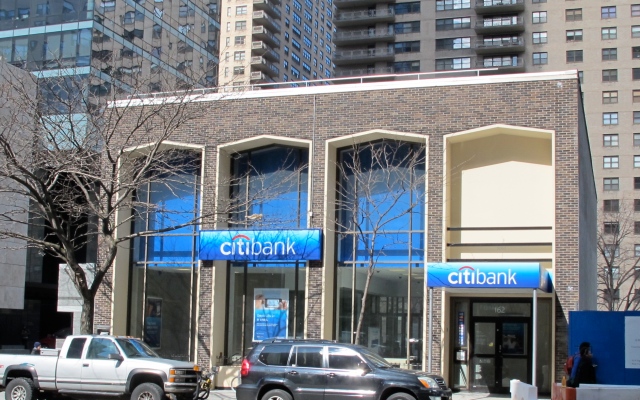 Located at Amsterdam Avenue and West 67th Street is this Citibank branch, originally First National City Bank, dating from 1964. The architect was Alfred Easton Poor, who did bank branches and office buildings for Chemical Bank, Corn Exchange Bank and Marine Midland Bank, as well as more prominent projects like the Javits Federal Building.

The site is part of the Lincoln Square Urban Renewal Project, the largest urban renewal undertaking in New York City, which began in 1958. Several buildings in this stretch of the renewal area have come down in recent years, most notably Skidmore Owings and Merrill’s American Red Cross Building at the corner of 66th Street and Amsterdam Avenue from 1958-64 (in the background of the image the bank’s brick side wall is visible). In addition the Lincoln Square Synagogue up the street (seen below and also previously featured here) is now boarded up and will be demolished and replaced by a residential tower. The Edward Durell Stone-designed Public School 199 around the corner is also threatened with demolition.